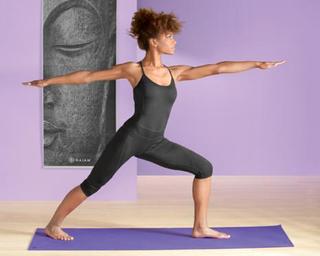 There are several levels of Asana classes that range from low intensity to high intensity-power asanas. For the sake of simplicity, I will refer to them as either Active forms (moderate to high intensity) or Restorative forms (low to moderate intensity). Remember that all Asana classes are designed to enhance mind-body consciousness, to increase strength, flexibility and agility. But, with respect to the physicality--Here are some guidelines that might be helpful in identifying which type of yoga is appropriate for your needs.

Hatha Yoga: This disciplines aim is to unify the two energies of Ha (the left) and tha (the right), and merge them into susumna in the center of the spine; it is the merging of these energies that is the essence of Hatha Yoga. There are many variations and types of HathaYoga however; I will identify several of the most popular forms of yoga practiced today.

Ashtanga Yoga or Power Yoga (Active-Highly dynamic Form) has become very popular in places like New York, LA and Colorado. Its a high energy, highly dynamic yoga that requires great amounts of strength and dexterity to handle its rigorous, dynamic pace. Ashtanga means eight limbs or divisions. These eight divisions are Yama (restraint), Niyama (Observances-or self awareness), Asana (Postures-the yoga class) Pranayama (breath control-how you breath, Prana is life force), Pratyahara (turning the mind inward-self reflection), Dharana (concentration), Dhyana (meditation) Samadhi (total enlightenment-mind body and spirit). These eight limbs are referred to in all hatha yoga practices as the philosophical basis for practice. These eight limbs are the focus of a daily practice. An Ashtangie (those who practice regularly) will practice anywhere from 30 minutes to two hours. Things to look for: The hallmark of an Ashtanga Yoga or Power yoga class is the constant flow or swift pace of non stop movements (known as vinyasas or connecting movements-usually the sun salutation); the use of deep ujjayi, (u-jai-e) breathing and the use of bandhas or locks to help intensify the effects of the postures through building internal heat in the body. Effects: energizing, highly stimulating, develops full body strength and flexibility and mental focus.

Bikram's Yoga (Active Beginner Series) A form of Hatha yoga that focuses on building lower body strength and weight loss. This is a beginners yoga of 26 postures performed in a heated room (90+degrees) and is a 90-minute class. All postures are held anywhere from 30, 45 to 60 seconds and are performed twice. Bring a towel and a water, you will need them both. Effects: energizing develops lower body strength and flexibility, weight loss.

Iyangar Yoga (Restorative) Iyangar yoga is defined by it uses of postures to assist the body in it capacity for moving into alignment. Close attention is placed on performing the postures correctly. The use of props such as straps and blocks and pillows is common and often helpful for the novice or terminally inflexible. Focus is also placed on breathing into the postures to help sustain and increase the effects of the postures. Classes are often 90 minutes. Effects: Intensely stimulating, relaxing and teaches good basics to prepare for more active forms.

Viniyoga (Restorative) A ninety minute class which focuses on the restorative aspects of flow. Postures are assigned in a sequence that may vary from class to class, depending on the theme or direction of the particular class. The many styles of pranayama breathing techniques are often included in this class and used to enhance the therapeutic effects of the postures. Effects: Very relaxing and opening for the body's energy.

Kripalu Yoga (Restorative) Focuses on slow moving postures and breathing. It is the Yoga of the Kripalu Ashram in Lennox Mass. Classes can be anywhere from 60 minutes to 90 minutes. Effects: Opening body energy, breath awareness, stress reduction.